It seems that there's a trend of "blogging boldly" lately.  I haven't jumped on that bandwagon, until now.  Please bear with me as this post will not have photos, recipes, or funny stories about my precious girls.  I have spent a lot of time thinking about marriage lately and feel it unfair to keep my thoughts to myself.   So, here goes:

I love my husband.  I knew he was the one I was going to marry before he did. :) Almost 9 years ago, I stood in front of 124 people (and God) and vowed to love him forever.  Through sickness and health.  Through good times and bad.  Until death parts us.  And I meant it.  I don't know why I'm still surprised when I hear about people divorcing.  It's common now (sadly). What's more surprising to me than anything is that divorce is nearly as common among those that consider themselves "Christian church-goers" as it is for those that are not affiliated with organized religion.

I've said to Brian over and over, "I just don't get it.  How do you get to a point that you are willing to walk away?"  Now I'm not talking about abuse.  I would never condone anyone staying in a relationship where physical violence was involved.  That is NEVER ok.  But I would dare to say that the majority of marriages that have ended in divorce are NOT due to abuse.

Most folks I know say that they just grew apart.  Stopped talking.  They say they fell out of love.  My favorite is when I hear "it just wasn't working."  I don't get that.  What wasn't working? The magic marriage fairy? I hate to tell ya, but there is no such thing.  No one else is going to make your marriage "work" except for you and your spouse.

(this is the part where I give completely unsolicited advice)
What do you do when that happens?  My solution? Don't let it get there.  It takes two to grow apart.  In silence, two people are not talking.  Make your marriage a daily priority.  Don't get complacent.  There are books about marriage; literally thousands of them.  Hang out with people that have healthy marriages.  Learn to communicate with each other.  (Admittedly this is something we are getting better at, but only after nine years).  Speak your spouse's "Love Language."  (This is referring to a fantastic book called the "Five Love Languages" by Dr. Gary Chapman).   Go on dates without kids.  Probably most important, is- pray together.  My cousin, who is also a pastor, said that he has never counseled a couple that prayed together.  He wasn't calling it a cure-all, but there certainly has to be a correlation.  Couples that pray together don't end up in counseling.  At least not in his office.  So we committed to doing that.  I will say that at first it was awkward and even a bit embarrassing.  But we persevered and now our day does not feel complete without it.   I was also given a great bit of advice before I got married.  It went something like this, "Don't ever speak badly about your husband to others.  When they see him, they won't remember his redeeming qualities but rather all the complaints you have spoken about him."  How true.  There is power in our words, which is why I think it's equally as important to make sure my husband knows that I recognize his redeeming qualities, and admire him for them.

Is each day going to be easy? No.

Is each day as a parent easy? Heck no! But we keep doing it because it's what we are called to do.  And it's a commitment we made when we had children.  And because the rewards far outweigh the stress.

Marriage is not all butterflies and roses.  Some days are better than others.  That's where the "for better or for worse" comes in.  It's a choice to love just as it is a choice to leave.

Especially for those that love the Lord, and trust in God's promises, if you believe the Bible, then divorce is not an option.  Fight for your marriage.  Some friends of ours attended a marriage conference in Virginia and they were told,  "Each day in marriage is a battle because the devil is fighting against it.  So put on the armor of God and go to war."  Even Pat Benetar said "Love is a Battlefield." (hehe!)

I may be stepping on toes, and you may disagree, but I'm just tired of the tolerance we have taken on the issue of divorce.  I'm sure you know great people that got divorced.  I do too.  I also know folks that fought hard for their marriage and the other spouse just wasn't willing to do their part.  But I also know people that got divorced and later regretted it.  I also know folks that started fighting for their marriage too late. Don't be one of those (see paragraph 5 above).  I know there's more I'm missing and I know there are scriptures to back up my suggestions (and maybe even statistics from research journals), but this much I know: Anything worth having, is worth working for.

I'm stepping off my soapbox now.  Thanks for listening.
Posted by Heather at 8:49 PM 10 comments:

We've been laying low for the last few days.  Skylar's birthday was dampened by a "bug" that went sweeping through our house. We didn't get to go eat at her favorite restaurant, make her pink rainbow cake, or open gifts. After that one cleared, a few of us (myself included) started fighting off a sore throat/cough/stuffy head.  I have to say that we have had a VERY healthy cold/flu season so I'm trying to take these two bouts in stride.  We're hoping to have a birthday "re-do" this weekend.  It's supposed to rain so it's a good weekend to rest, drink lots of vitamin c, take some extra vitamin D (which I plan to write a whole post on later), and celebrate our sweet four year old.  In the meantime, here's a snapshot of our outing last week to the duck pond. 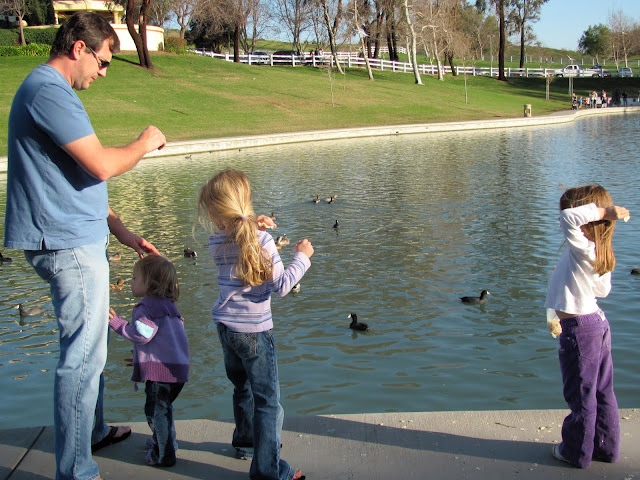