September has been crazy! I started this blog as a way to document what's going on in our family but I've been too busy to even write posts! All of that changes next week.  We are slowing down.  For some reason, September was the month of visiting friends.  It felt like summer, but instead of just having lazy days to play, we had school to contend with (among 50 other things). We LOVED seeing so many friends though, and the girls are already asking when we get to see them all again. :)

I haven't downloaded pics yet, but promise to soon.  Here is a random recap of the last few weeks for us:

The girls are loving the new school (and we are too!).  We successfully completed a few "homeschool" days, and they are quickly becoming our favorites.

Skylar's teacher used to be Belle at Disneyland so it took her a while to remember her first name.  It's so much easier to just say "Belle." :)

Reagan was nervous about starting at a new school because she was worried about all the other kids already having friends and not including her.  So we prayed that she would meet someone on the first day and make a friend.  We were in her classroom less than a minute when a mom said to me, "Are you guys new here too?" Our girls ended up being at the same table and became fast friends.  Now they are in separable and so sweet to watch.  It was neat for Reagan to see how God answers prayer.  The best part is that her new friend loves Jesus, just like Reagan.  Her mom and I are starting a mother's prayer group and hoping to see some great things happen at our little school.

I thought Bailey would miss her sisters, but she is loving the extra attention.  Of course she's still happy each day to go get Skylar.  We've used the time to do some "school" of our own and her writing skills are improving fast!  She sounded out her first word last week so she tells everyone that she can read now.  :)

I participated in my first consignment sale.  I finally parted with the rest of the baby clothes. (sniff. sniff.).  It felt good to get some bins out of the garage but the smell of the baby clothes took me right back to when they were tiny.  Don't worry, I still have two bins of "keepsake" stuff that I plan to make into a quilt for each of them.  But the rest needed to go.  I'm officially hooked on this consignment sale.  It's only twice a year, so I can save up my items and make a nice profit.

Last weekend we had a snake in the house.  Granted, it was tiny and not too scary, but still.  A snake.  In the house! Thankful for my wonderful husband that took care of it quickly.  Don't worry, it wasn't a rattlesnake, but still....a snake.

I have full laundry baskets calling my name.  Right after we go swimming, that is. :) It's HOT today!
Posted by Heather at 9:30 AM No comments:

We have events or barbeques at our house frequently so I'm often in search of ways to dress up our table (or kitchen island).

I've also been spray painting anything in my path lately.

So, when I needed something to put some fairy wands in that I made for a friend, I grabbed a pickle jar from the fridge, convinced Skylar she wanted to eat the last pickle, washed it out, and spray painted it.  I was officially hooked on re-using jars.

So, when I had a ladies event at my house this week, I took a look at all my jars that are "waiting to be painted" and decided to do something with them.

I put a little sand from the sandbox in, added a tealight and some raffia, and voila! 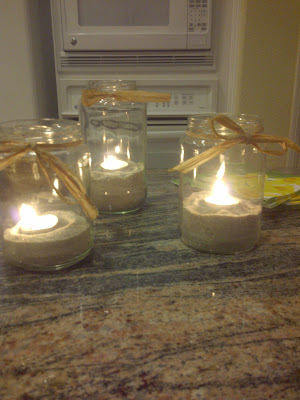