I'm taking a break from linky (cause it's being stinky today), but that doesn't mean I can't share my own funnies with ya! And if you want, go ahead and share some funnies in the comments. 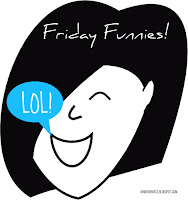 1. While driving, Skylar said, "That cloud looks like a purple dragon eating a sandwich!" (I love her imagination).  Reagan said, "Skylar, have you EVER seen a purple dragon eating a sandwich?" She replied, "Uh huh....right there in the sky."
2.  I asked Skylar and Bailey if they wanted a roast beef sandwich for lunch (since that what I was making for myself).  They both said, "Ew! No! That's gross!" So I made a sandwich for myself and told them I would make them something else after I finished.  So, of course when I sat down they both wanted a bite to "try it." Both of them said, "Oh, I like it! Can I have my own?" And there went my sandwich....
3.  Reagan has officially discovered Hannah Montana.  But not because her friends like her, but because she saw that Miley has a horse.  Go figure.  Now we can sing the theme song like the best of them!
4.  My friend Rachel doesn't blog so she gave me permission to share this one: Her boys are 7 and 4.  The 7 year old and a female buddy were talking about having to go potty.  The 7 year old told the girl, "Just go in the woods." She replied "I can't do that. I don't have one of those." The 4 year old piped up, "I have 52!" Rachel said, "Obviously he had no idea what they were talking about, but wanted to participate." ;D
Posted by Heather at 11:15 AM 4 comments: