Fast, and not so fast.

The past 30+ have been a challenge for me.  Our pastor did a series on "fasting" and after some prayerful consideration, I decided to give up all social media.  I also fasted an occasional meal, but that's not what this post is about.

To be honest, when I first decided to fast, I wasn't sure I would make it.  I crave social interaction.  Most days that interaction comes in the online version.  I don't like to feel "out of the loop." Then I started to wonder if folks would even notice I wasn't around.  Of course that made me feel even more anxious!
"How in the world will my friends function without me?!"
It won't surprise you that life went on.  I didn't log on.  My friends survived without me.  I got on without them.  A few emailed me and said "I miss you" (which, let's face it, made me feel SO good!).  The first few days weren't "hard" but I did find myself picking up my cell phone to check facebook and having to remind myself not to do it.  It was hard to not click on the bookmarks while I was working on the computer.  But after a few days I didn't even think about it.  Then, an odd sense of relief set in.  I didn't feel like I had to "keep up."
It did help that we had a busy month.  We had Brian's parents visit for a week and had a wonderful time! Then, we had a few days before our good friends from Philly came to visit.  The day before our friends arrived, I started teaching again.  It's a fast track course at the community college with a new textbook so I have to spend almost as much time in preparation as I do actually teaching.
Now, the real purpose of fasting is to draw closer to God.  So, you are supposed to use the time that you "would be doing something" (like eating or being on facebook) to spend time with the Lord.  For me, my time on facebook and blogger were never large chunks of time.  They were small snippets here and there.  I actually felt a bit guilty because I wasn't being super spiritual and spending hours in prayer.  But our pastor spoke on that EXACT thing during the fasting month.  He said, "God doesn't want you to cram it all in.  He wants you....throughout the day." So that's what I did.  I prayed each time I thought about checking facebook or twitter or blogging.  The oddest thing happened.  I stopped thinking about facebook and twitter and blogging and started just conversing with God throughout my day.  I created a new habit, and I love it.
I realized that without social media I wasn't just sitting and twiddling my thumbs.  I NEVER had extra time.  My day just got filled up with other things.  I even wondered at a few points, "How in the world did I have time for all the social media before?" I realized that we MAKE time for the things that matter.

Even though we were busy, January felt like it would NEVER end.  I even told someone at church on January 30th, "well, back in January..." and she looked at me with a puzzled expression.  Then she said, "Isn't it still January?"  Sigh.  Yes, January was long and by the end of the month it felt like it should be March.

My class is only 8 weeks long but feels like I've already been teaching for 8 weeks.

We all got colds but the girls recovered super fast.  I think my crazy schedule made mine linger so it wasn't so fast for me.

I think all 3 girls grew at least a few inches since Christmas. They're growing so fast.

I hit my goal weight finally! (praise God!) It felt like it would never happen.  I almost got hit by a truck while running last week. He wasn't going fast, but I was.  :)

A week after being here, Brian's mom went to the hospital with a nagging cough and shortness of breath.  She was diagnosed with uterine cancer that has spread to her lungs.  It seems like it hit so fast.  She already went through one surgery and will begin chemo in about 4 weeks.  The treatments won't be fast, but we're praying they are effective.  Your prayers are appreciated.

I'm thankful for these three blessings: 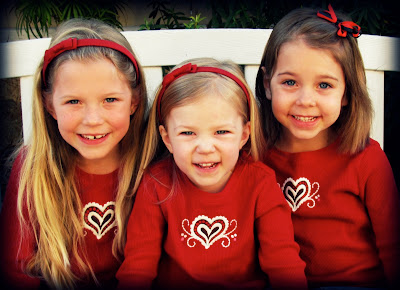